The dramatic rescue of the boys trapped deep inside a cave in Thailand has been an inspiration around the world. That all of them could be brought out alive seemed almost beyond belief, yet because of the bravery, skill and ingenuity of their rescuers it happened. One news reporter spoke about their ‘salvation’, and it seems to me that here is a remarkable illustration of the salvation that Jesus offers us.

The boys were trapped deep underground in the darkness of a flooded cave for nine days, with no way of escape and no hope of saving themselves. They were lost and cut off from the outside world, separated from their families and friends. What a picture of the condition we find ourselves in when we are separated from God because of our sin.

Help for the boys came in the form of experienced divers and skilled cave rescue teams, not just from within Thailand, but from all around the world. These brave people left what they were doing to save the boys, exposing themselves to danger and harm, and risking their lives to rescue the boys. Indeed, one Thai navy diver lost his life in the process. They entered the dark world of the cave system to search for the boys and bring them back home. It reminds us that Christ left the glory of heaven and entered the darkness of our world in order to rescue us from our spiritual plight. He took on human form and became one of us so that he might save us – and of course, it cost him his life.

What was most striking to me was that, having found the boys, they then had to carefully escort each one through the floodwaters of the cave system. One diver went in front, and another came behind, while the boys has to trust completely in their rescuers during the arduous exit from the caves. Only in this way could they be saved. I am reminded of again of the way in which Jesus, in bringing many sons to glory (to use a phrase from Hebrews 2:10) gently and carefully leads each one of us from the dark place of life without God into the light of his presence. He asks us to trust him as he leads the way, and to belief that he is able to save us completely and for all time.

The book of Hebrews uses an unusual title for Jesus. It calls him the ‘pioneer’ of our salvation (2:10). The word ‘pioneer’ suggests one who goes before us, making a way possible where there was no way before. It suggests an adventurer, one is brave and bold and willing to risk everything to save others. In a very real sense the as yet unnamed people who rescued the boys were pioneers, because such a rescue had never been attempted before. It was daring, dramatic and heroic. So too was the rescue mission of Jesus that brought him into our world and took him to the darkness of the cross at Calvary. It’s what pioneers do; lay down their lives for others. It’s what Jesus did for me, and for each one of us. 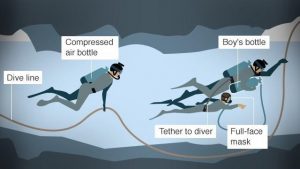 ARE YOU ENJOYING YOUR BIBLE?

One of the best ways to enjoy your Bible is to use some form of daily Bible reading notes that not only suggest a passage for you to read each day, but also supply you with a brief comment to help you engage with the passage. Why not try NEW DAYLIGHT from the Bible Reading Fellowship (www.brf.org.uk)? I am a regular contributor to these notes and feel they have some great writers with a balance of viewpoints. If you enjoy longer times to spend with God, or like to plan your own Quiet Day, why not try QUIET SPACES, a devotional guide designed to give you material to use yourself, however you want? Also available from BRF.